Satwiksairaj Rankireddy and Chirag Shetty claimed the bronze medal in the men’s doubles competition of the World Championships after losing against Malaysia’s Aaron Chia and Soh Wooi Yik in the semifinals on Friday. 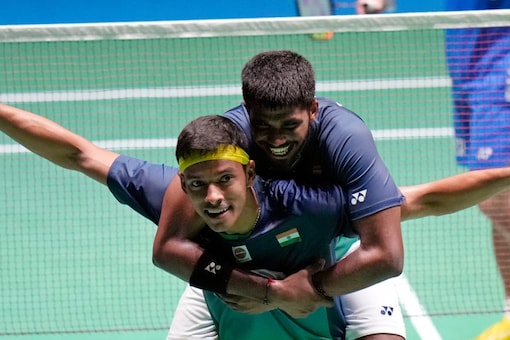 The world number 7 Indian pair did really well to win opening game 22-20 but lost the next two 18-21, 16-21 in an intense 77-minute clash to bring an end to the Indian challenge at the tournament.

This was Satwik and Chirag’s sixth successive defeat against the Malaysian pair. The Indian pair were off to a good start and won the big points in a tight opening game. Chia and Soh did their best to reduce the deficit but Satwik-Chirag eventually prevailed to take the first game 22-20.

The second and third games were also close but the Malaysians showed their calibre by maintaining their composure during key moments and scripted a brilliant comeback victory.

While Soh’s big smashes and deceptive winners did the job in attack, Chia produced solid defence in tough rallies. Satwik tried to capitalise on his attacking game but Chirag’s inconsistency made it difficult for them to win consecutive points.

Despite the loss, it was a creditable show by the young Indian pair as it ensured India continued to return with a medal from the World Championships since 2011, the year the country won its first doubles medal with Jwala Gutta and Ashwini Ponnappa returning with a bronze.